Bitcoin for Dummies is a book that provides a guide to buying, selling and trading the popular cryptocurrency Bitcoin, targeted at newcomers to the world of cryptocurrency. This review will provide an overview of the book, what it does well, and any shortcomings or flaws it may have.

Bitcoin for Dummies, written by Prypto, covers the basics of how Bitcoin works. This includes an overview of the blockchain and how Bitcoins are created, the ways to buy, sell and trade Bitcoin, and how to store it. 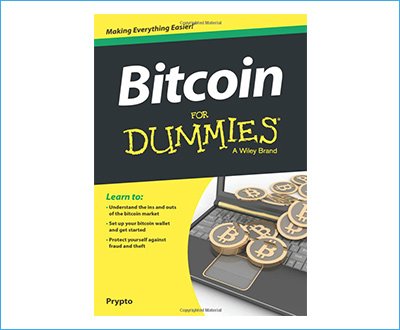 For someone looking to get into the Bitcoin market, this book will cover a step-by-step explanation of how to set up a Bitcoin wallet, how to use exchanges to buy or sell bitcoins, and security tips to help users avoid fraud or theft as they trade Bitcoin. The book also covers Bitcoin mining, the process by which Bitcoins are created, though is not a necessary activity to trade Bitcoin.

The book is broken down into sections and sub-sections for ease of reading, and uses clear, simple language to cover a sometimes-technical topic. The entire book is 208 pages long, meaning reading it from cover to cover would take a significant amount of time. However, any read is probably going to want to read it in smaller chunks as they get more familiar with the various aspects of Bitcoin.

Bitcoin for Dummies is a solid reference for someone brand new to the world of cryptocurrency and Bitcoin. It has very clear, step-by-step tutorials to get you started with basic Bitcoin purchase and storage.

Most of the main concepts connected with Bitcoin are well represented in the book, and the level of complexity is appropriate for a new Bitcoin user. If you’re looking for a reference that will get you from point A (unfamiliar with Bitcoin) to point B (owning and storing your own Bitcoins), this book is up to the task.

One thing missing from this book which might especially disappoint long-time users of the ‘… For Dummies’ series is that this book isn’t particularly humorous. Many of the ‘… For Dummies’ books tend to have an irreverent and mildly joking tone, and that’s not present in this book. The information itself is on a level of what you might expect from a book in this series, just not the tone at all times.

Another possible critique is the fact that the book devotes a decent amount of space to certain topics which might not be important to a casual user of Bitcoin. For example, the sections on Bitcoin mining may feel unimportant if you’re not going to devote the resources necessary to mine Bitcoin. Of course, these sections can be skipped.

If you’re just getting started in the world of Bitcoin, Bitcoin for Dummies is a good first reference resource. It covers the basics of how Bitcoin works in a clear, understandable form and allows you to get started buying and selling for yourself.

Feel free to share your own experiences or questions on understanding bitcoin for dummies below.